The Iowa Supreme Court’s 2013-2014 term is over  (with the exception of a few pending petitions for rehearing on late-decided cases), so it’s time for our annual statistical review.

The Basics. The court decided 107 cases this term, including those cases that were affirmed by operation of law when the court was evenly divided.  That is a slight increase from the 100 cases decided in the 2012-2013 term.  A majority of the cases, 58, were civil; 25 were criminal or related cases; 20 were attorney disciplinary cases; and 4 were juvenile or related cases.

Split Opinions. The vast majority of cases, 75, were unanimous; 69 of these cases were completely unanimous with no concurring opinions and 6 had a concurring opinion.   That leaves 32 opinions, or 29.9% of the cases, in which one or more justices dissented.  This is essentially the same percentage of dissents as last year when 30.0% of the cases had a dissent.  Seventeen of these cases were decided by one vote — with a split of 4-3, or when one justice was recused a split of 3-3 or 4-2.

Justice Agreement. For the third time in as many terms, there were two relatively consistent voting blocs, with  Justices Wiggins, Hecht, and Appel on one end, and Justices Waterman and Mansfield on the other.  The Chief Justice and Justice Zager continue to fall somewhere in between, agreeing with each of their colleagues between 40-70% of the time. The justices that agreed the least were Justice Mansfield and Justice Wiggins who agreed in 13% of the non-unanimous cases.  In the 17 cases that were most closely divided, all but two were split with Justices Wiggins, Appel and Hecht on one side, Justice Waterman, Mansfield, and Zager on the other, and Chief Justice Cady deciding which group was in the majority. 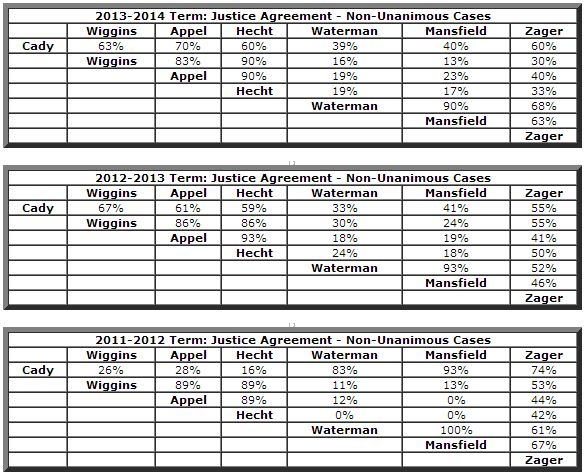