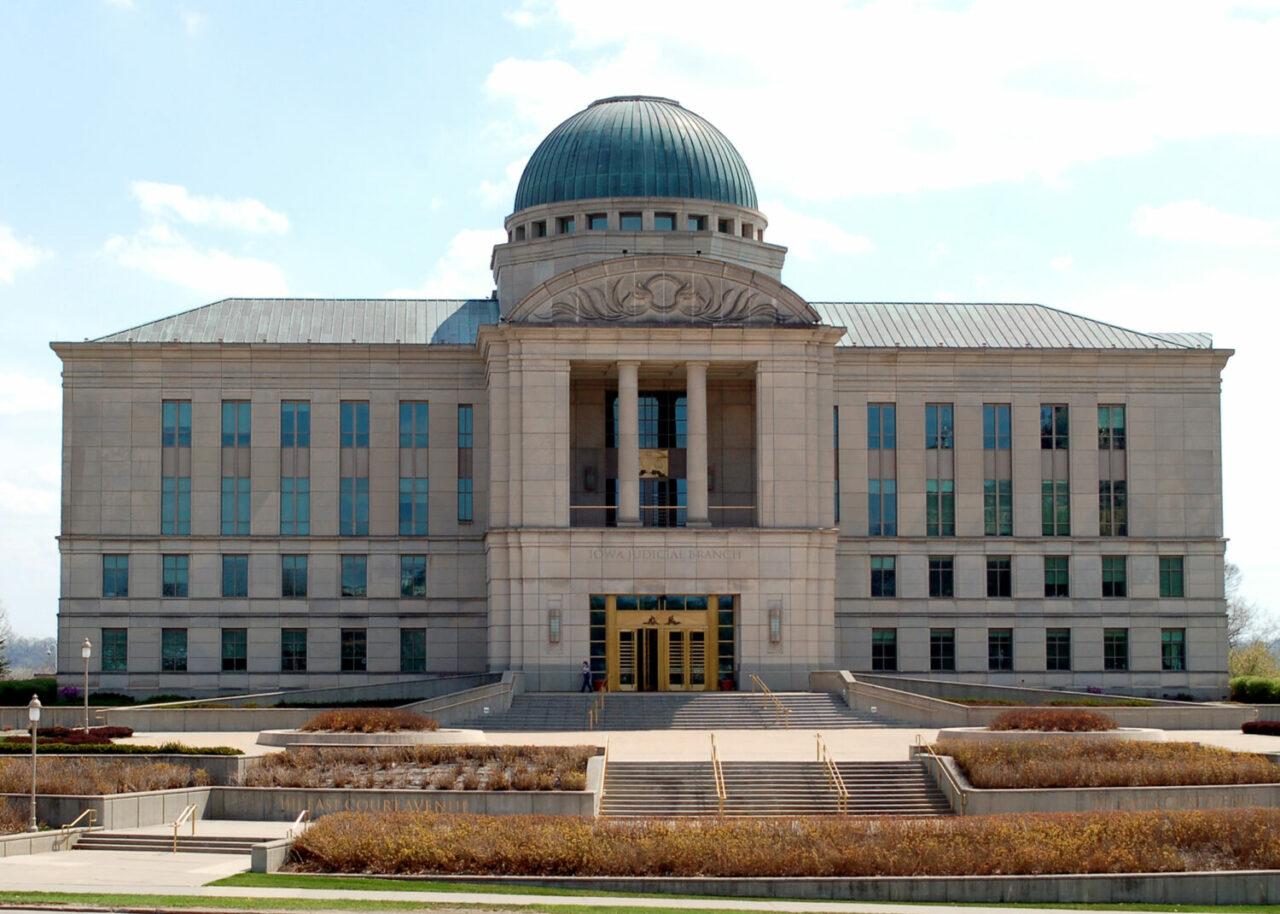 The Iowa Supreme Court will hear arguments in nine cases Nov. 16 and 17. Three other cases will be submitted to the Court without oral argument. Following are short summaries of the November cases. Go to On Brief’s Cases in the Pipeline page to read the briefs in these cases.

The State appeals from a Polk County District Court ruling denying the State’s motion to dismiss a wrongful-termination action brought by Polly Carver-Kimm against Gov. Kim Reynolds, the governor’s spokesman, and Iowa Department of Health administrators. Carver-Kimm claims her dismissal as the Health Department communications director violated the whistleblower provision in Iowa Code section 70A.28, and that she was wrongly discharged in violation of public policy for actions taken to comply with Iowa Code Chapter 22, the Iowa Open Records Act. On appeal, the State argues the case raises three questions of first impression: whether common-law and statutory wrongful discharge claims can be brought against the governor and her staff by an agency employee when the State contends that the governor had no authority to discharge the employee; whether the governor and her staff are entitled to qualified immunity for a wrongful discharge claim under Iowa Code section 669.14A; and, whether the policies embodied in the Open Records Act supports a claim for wrongful discharge in public policy. Amicus curiae briefs in support of Carver-Kimm were filed with the Court by the Iowa Association for Justice and by the Iowa Freedom of Information Council.

Question: Did a criminal suspect voluntarily waive her Miranda rights when questioned by detectives who made promises of leniency?

The State seeks further review of a June 15 Iowa Court of Appeals ruling affirming in part and reversing in part a Dallas County District Court ruling on a motion by Gowun Park to suppress statements made to West Des Moines police investigating the death of Park’s husband, Sung Nam. Park is charged with first-degree kidnapping and first-degree murder for Nam’s death. The Court of Appeals reversed the District Court’s holding that Park was in custody when detectives initially interviewed her in her home, but the three-judge panel agreed with the trial court that Park did not voluntarily waive her Miranda rights during a subsequent interview. The panel held detectives made deceptive promises of leniency during that interview, which tainted three subsequent interviews. In its application for further review, the State argues there were no impermissible promises of leniency and that any deception by detectives did not undermine the voluntariness of Park’s waiver of her Miranda rights.

Question: Was summary judgment properly granted to defendants because the plaintiffs failed to substantially comply with the expert witness certificate of merit requirement in the first version of their lawsuit?

Jahn and Sara Kirlin appeal a Pottawattamie County District Court ruling granting motions for summary judgment to the defendants in the Kirlins’ medical negligence action against Dr. Barclay Monaster, Dr. Christian Jones, and Methodist Physicians Clinic for Jahn Kirlin’s injuries as a result of what the Kirlins claim was negligent treatment. The Kirlins argue on appeal that the District Court erred in granting the defendants’ motions for summary judgment based on the Kirlins’ failure to substantially comply with the certificates of merit requirement in Iowa Code section 147.140 in their first suit, which they voluntarily dismissed before filing the current action making the same claims.

Will be submitted to the Court Nov. 16 without oral argument.

Question: Did a trial court err in dismissing a refiled medical malpractice suit based on the plaintiff’s failure to timely file a certificate of merit in the initial complaint?

Susan Ronnfeldt appeals from the Shelby County District Court’s dismissal of her medical malpractice action against Shelby County Chris A. Myrtue Memorial Hospital. Ronnfeldt argues the District Court wrongly dismissed the suit with prejudice after she voluntarily dismissed the case after the defendants filed a motion to dismiss on grounds that Ronnfeldt failed to timely file a certificate of merit as required by Iowa Code section 147.140. Ronnfeldt argues she is able to refile her complaint with the proper certificate of merit because she voluntarily dismissed the first case under Iowa Rule of Civil Procedure 1.943, which allows plaintiffs to dismiss a claim at any time up until 10 days before a trial is scheduled. She further argues code section 147.140 violates the constitutional separation of powers doctrine because it conflicts with the right to voluntarily dismiss a case under Rule 1.943.

Question: Was a Hispanic plaintiff presented with an all-white jury panel wrongly denied a jury representing a fair cross-section of the community?

Michael Savala appeals from the Polk County District Court’s decision overruling his objection at trial to the all-white composition of the jury panel in his employment discrimination action against the State, thus denying him the right to a jury made up of a fair cross-section of the community. Savala, who is Hispanic, claimed he was subjected to discrimination by the Iowa Department of Corrections based on his age, race, color, and national origin. A jury returned a verdict in the State’s favor. Savala asks the Supreme Court to remand the case to the District Court to provide him with access to jury venire records necessary to evaluate whether Latinos were systematically underrepresented in his jury panel.

Question: Did the Iowa Court of Appeals err in affirming a trial court ruling regarding an age discrimination claim?

Swift Pork Co. seeks further review of a March 30 Iowa Court of Appeals ruling reversing in part and affirming in part the Marshall County District Court’s grant of summary judgment to Swift Pork Co. in David Feeback’s employment action alleging age discrimination, workplace harassment, and wrongful termination. The Court of Appeals reversed the trial court on Feeback’s age-discrimination claim while affirming on the other issues. Swift Pork argues in its application for further review that the Iowa Supreme Court should resolve questions raised in this case with respect to the test for determining whether employees are similarly situated pursuant to claims under the Iowa Civil Rights Act and the applicable standard for civil rights claims applied at summary judgment.

Will be submitted to the Court Nov. 16 without oral argument.

Question: Should a criminal defendant have been granted a directed verdict based on a lack of independent corroborating evidence to testimony of an accomplice?

Joseph Bloom seeks further review of a July 20 Iowa Court of Appeals ruling affirming in part and reversing in part his conviction by a Wapello County jury for burglary in the first degree, robbery in the first degree, assault while participating in a public offense causing serious injury, and willful injury causing serious injury. The Court of Appeals remanded the case with instructions to merge Bloom’s conviction for willful injury into his first-degree robbery conviction while rejecting his second merger claim, and it rejected Bloom’s challenges to the sufficiency of corroborating evidence. In his application for further review, Bloom argues the District Court erred in failing to grant a directed verdict of acquittal based on the lack of independent corroborating evidence to the testimony of an accomplice.

Questions: Can restitution be ordered following dismissal of a case? Does the defendant have a right to appeal a dismissed simple misdemeanor?

Royriguez Patterson appeals a pecuniary damages restitution order entered in Polk County District Court following entry of his guilty plea to a charge of serious injury by vehicle. As part of the plea agreement, additional charges were dismissed with the requirement that Patterson pay court costs and victim restitution. However, restitution was ordered in the dismissed case. Patterson argues the plea agreement did not authorize the trial court to enter a restitution order not permitted by Iowa Code sections 910.1(1) and 910.2(1)(a) (2019). A question in this case is whether the Supreme Court has jurisdiction to hear Patterson’s appeal. The State argues the Court lacks jurisdiction to consider Patterson’s appeal of a dismissed simple misdemeanor case. Patterson argues he has a right of appeal from the pecuniary damages restitution order entered after judgment and sentence, or in the alternative, that he should be granted a writ of certiorari.

Questions: Should a plaintiff be allowed to dismiss his initial complaint to refile a new one that complies with pleading requirements in Iowa Code?

Marcelino Alvarez-Victoriano appeals a Black Hawk County District Court order granting a motion to dismiss with prejudice filed by the City of Waterloo, the Waterloo Police Department, and Officer C.J. Nichols. Alvarez-Victoriano sued the city, its police department, and Officer Nichols for his injuries resulting from an officer-involved shooting. Alvarez-Victoriano filed a motion to voluntarily dismiss without prejudice, which was resisted by the defendants. Alvarez-Victoriano argues he is entitled to a voluntary dismissal without prejudice in order to refile a petition that complies with the pleading requirements of Iowa Code section 670.4A(3) regarding qualified immunity. Iowa Attorney General Tom Miller filed an amicus curiae brief for the State of Iowa in support of Alvarez-Victoriano. The State argues that Code section 670.4A(3) does not prevent plaintiffs from amending or voluntarily dismissing and refiling a petition that complies with the section’s pleading requirements.

Will be submitted to the Court Nov. 17 without oral argument.

Question: Did the District Court wrongly order release of confidential peace officers’ investigative reports to a plaintiff seeking the records through a discovery request in a civil action?

Polk County and Polk County Sheriff Kevin Schneider appeal a Polk County District Court order that they produce to plaintiff-appellee Michelle Vaccaro confidential peace officers’ investigative reports related to the Sheriff’s investigation of a motorcycle accident that resulted in the death of Vaccaro’s daughter. The sheriff provided to Vaccaro the immediate facts and circumstances of the accident as required by the Iowa Open Records Act in Iowa Code section 22.7(5), but, due to her concerns about the way in which the Polk County Sheriff’s Department conducted the investigation into the fatal accident, she filed an action in District Court seeking access to all investigative documents through a discovery request. After reviewing the documents in camera the District Court ordered the defendants to produce all documents sought by Vaccaro. Polk County argues the trial court erred in ordering disclosure of the documents at the discovery stage, prior to giving Polk County its statutory right to present evidence supporting its determination that the documents were confidential peace officer investigative reports under section 22.7(5).

Question: Is the owner of a condominium unit, not the homeowners’ association, liable for damages following a tenant’s slip and fall on an icy driveway?

Shelley and Cameron Barnes seek further review of a May 11 Iowa Court of Appeals decision affirming a Polk County District Court order granting summary judgment for CDM Rentals in a premises liability action. The Barneses sued CDM rentals, the owner of the condominium unit they rent, for negligence after Shelley Barnes slipped on ice and snow on the unit’s driveway. The District Court held that because CDM did not own or control the driveway — a limited common element — CDM had no duty to maintain the driveway. The Court of Appeals agreed, saying the home owners’ association, not CDM,  is responsible for the maintenance, repair, and replacement of limited common elements, including private driveways. In their application for further review, the Barneses argue the Court of Appeals decision failed to address their negligence claim that a downspout empties water from the roof to the middle of the driveway, and that it did not adequately consider that the Iowa Uniform Landlord Tenant Act should control over a homeowners’ association.

Question: Which of two creditors’ claims should prevail in a battle for proceeds from sale of a bankrupt dairy farm?

[Disclosure: Nyemaster Goode attorney Matthew A. McGuire represents an amicus curiae who filed a brief in support of Quality Plus Feeds in this appeal.]