The Iowa Supreme Court’s 2019-20 term was marked by change and disruption. Change came with the appointment of two new justices and the selection of a new chief justice. Disruption came with the coronavirus outbreak that suspended oral arguments and closed the Judicial Branch Building to the public.

The 102 decisions turned out by the Court during the nine-month term that ended June 30 were actually the work of six differently constituted Courts.

On November 15, 2019, the Court was shaken by the unexpected death of Chief Justice Cady, and the Court consisted of six justices with Wiggins as Acting Chief Justice. In February, Christensen was selected to become Chief Justice, and Dana Oxley was appointed to replace the late Chief Justice Cady. In May, Matthew McDermott joined the court following the retirement of David Wiggins.

The Covid-19 outbreak and the changing cast of justices forced the Court to do some last-minute reconfiguration of its docket: Oral arguments ended in March, resulting in several cases submitted without oral argument, and 34 of those cases were resubmitted after Justices Oxley and McDermott joined the Court late in the term. One case was held over until the next term.

When the Court was operating with six justices, it was evenly divided on three cases. In those cases, the decisions of the District Court were “affirmed by operation of law.”

Given these changes and disruptions, it is hard to draw many meaningful conclusions from this term’s statistics, but there are some worth noting:

Justice Appel was the most prolific author on the Court, writing 44 opinions. Although Appel wrote 11 majority opinions for the Court, he wrote 33 separate opinions where he expressed disagreement with the majority or wrote to amplify an issue.

Chief Justice Christensen was the only member of the Court throughout the entire term who authored no dissenting or concurring opinions (though she joined some written by others).

The justices were in unanimous agreement on 71 of the term’s decisions. In the non-unanimous decisions, some patterns are revealed in the accompanying tables of which justices are most likely to agree or disagree with their colleagues.

A clearer picture of how the individual justices will line up will come when they begin hearing cases next term. That begins with the first oral arguments, which are scheduled for September 16 and 17. The question, however, is whether that argument—and subsequent arguments—will be conducted in person or virtually as the pandemic lingers. 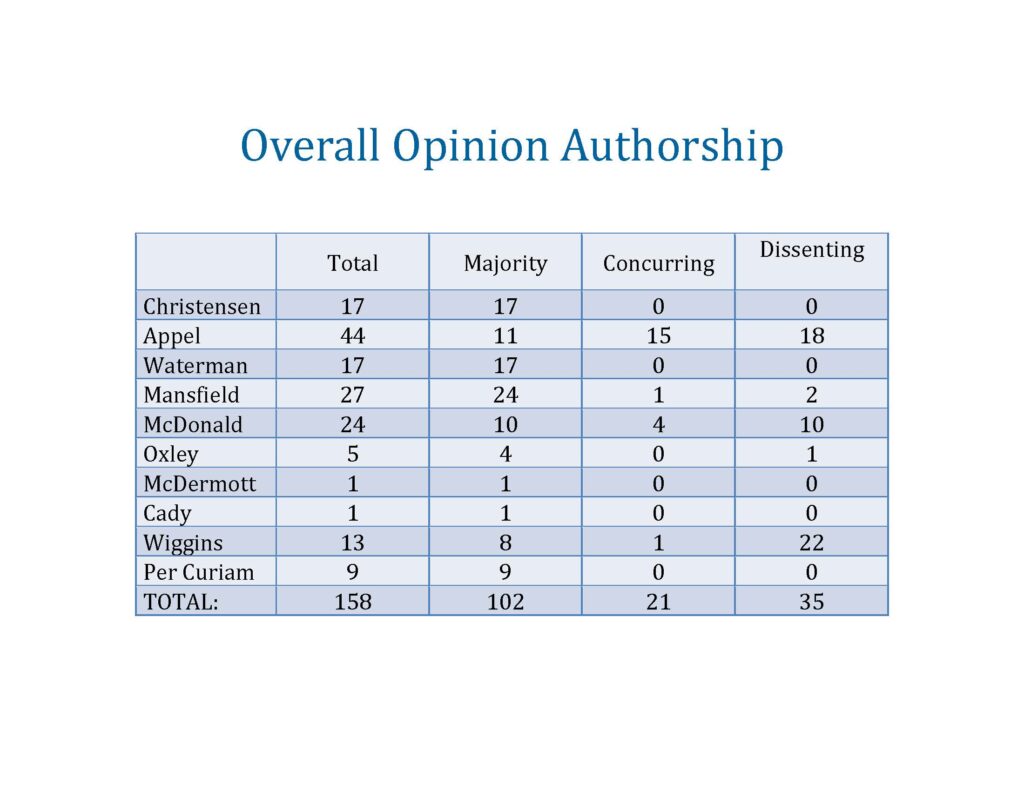