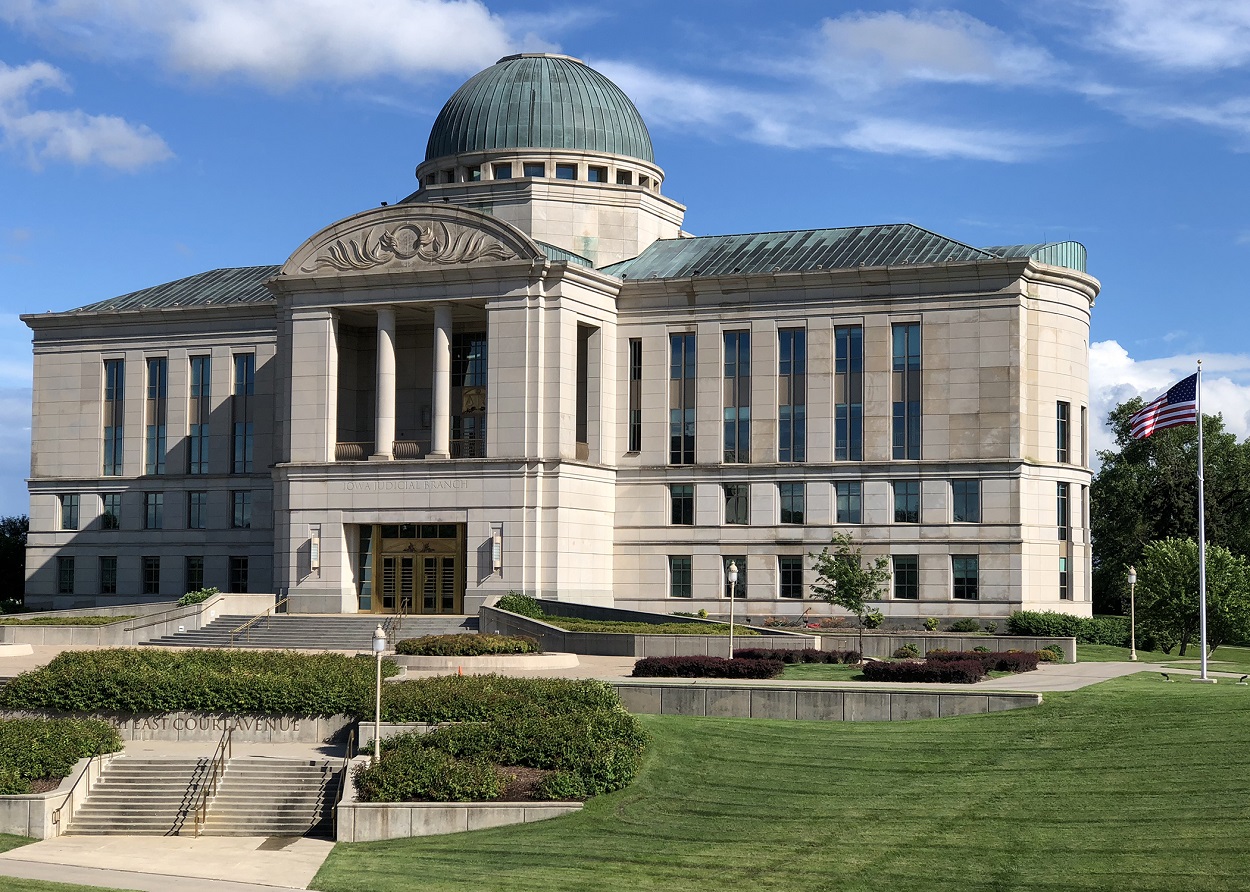 The Iowa Supreme Court is scheduled to hear oral arguments in seven cases Dec. 14 and 15. Five other cases will be submitted to the court this week without oral argument. Go to On Brief’s “Cases in the Pipeline” page to read briefs in these cases.

Following are summaries of the December cases.

Gary Kluender Jr. appeals the Floyd County District Court’s dismissal on summary judgment of his claim that the procedure outlined in Iowa Code section 447.9 for notifying landowners of their right to redeem property from a tax sale is an unconstitutional violation of due process. As required by section 447.9, defendant-appellee Plumb Grove Investments notified Kluender by regular and registered mail of his right to redeem the certificate by paying the back taxes plus interest. Kluender argues the statute’s notice requirement violates the Iowa Constitution’s mandate that no person be denied right to property without due process of law because there is no assurance a landowner receives either regular or registered mailings. To satisfy the procedural due process requirement, he argues, notice must be made by personal service.

Question: Did a plaintiff fail to demonstrate with expert testimony that a toxic chemical used in her place of employment caused her lung injury?

Jacqueline Uhler seeks further review of a June 15 ruling by the Iowa Court of Appeals in which the panel, divided 2-1, affirmed the Polk County District Court’s dismissal via summary judgment of her negligence suit against the Graham Group. Uhler’s lawsuit claimed she suffered respiratory damage from a chemical used to unclog a drain in the office building where she worked. The trial court held that Uhler failed to provide expert opinion establishing the chemical used by the defendant caused her respiratory injury. The dissent agreed with the majority that Uhler offered sufficient proof that a reasonable jury could find that the chemical she inhaled could, in the abstract, cause lung damage, but the dissent said the majority erred in requiring more or different evidence that exposure to the chemical was the cause of Uhler’s damage.

Question: Did a party intend to convert a joint real estate tenancy to a tenancy in common?

Defendant-appellant Dan Sickels seeks further review of a March 2 Iowa Court of Appeals ruling affirming the Ringgold County District Court’s holding that a declaration of trust executed by Helen Schardein prior to her death established that Schardein intended to sever joint tenancy with Sickels in a parcel of real estate. The Trust and Sickels would thus be converted to tenants in common and upon partition by sale of the real estate all net proceeds would be allocated to the Trust. Sickels argues in his application for further review that Schardein did not intend to sever the joint tenancy, only that her half interest in the real estate be transferred to her Trust. Sickels urges the Supreme Court to reverse the trial court and Court of Appeals and that he be determined the sole owner of the property as the surviving joint tenant.

Sam Abu Youm seeks further review of an Aug, 31 Iowa Court of Appeals ruling affirming a Polk County District Court ruling denying his motion to suppress evidence from an unlawful search and his motion for a new trial. Abu Youm was convicted by a jury on two counts of possession of a controlled substance with intent to deliver, and the jury found he was in the immediate possession or control of a firearm during the commission of his crimes. The Court of Appeals agreed with the trial court that a warrantless search of Abu Youm’s apartment was justified by the community caretaking exception to the warrant requirement based on the officers’ statements they were checking on possible injured persons after witnesses reported hearing gunshots. In his application for further review, Abu Youm argues the conduct of the officers who entered his apartment did not indicate an emergency existed.

In the Matter of the Subpoena Issued to Dethmers Manufacturing Company v. Tharun Mittapalli

Question: Did a trial court err in denying a third party’s motion to quash a subpoena issued by a plaintiff in a civil suit in another state?

Dethmers Manufacturing appeals the Osceola County District Court’s denial of Dethmer’s motion to quash a subpoena obtained by Tharun Mittapalli seeking documents and a deposition related to Mittapalli’s product liability suit filed in Louisiana against U-Haul International for injuries that Mittapali alleged he suffered after a U-Haul trailer hitch failed. Dethmers, which manufactures a coupler for the hitch in question, is not a party to Mittapalli’s Louisiana suit, and the Iowa manufacturer argues that complying with the subpoenas would place an undue burden on the company and force it to disclose proprietary and trade-secret information.

Question: Was a county empowered by a settlement agreement to define what the term “derelict vehicles” means?

Wapello County seeks further review of a divided 2-1 April 13 Iowa Court of Appeals ruling reversing the Wapello County District Court’s grant of summary judgment for the county on a breach-of-contract claim by plaintiff-appellees Rita and Cliff McNeal. The McNeals claimed the County violated a settlement agreement that had allowed the county to clean up their property because the County removed vehicles from the McNeals’ property that did not meet the definition of “derelict.” The Court of Appeals, in an opinion for two members of the panel, held that since the settlement agreement did not define the term “derelict” or give the County total authority to decide what it means, the County did not have a right to proceed as if both existed. A third member of the panel, in dissent, agreed with the District Court’s interpretation of the settlement agreement’s terms and would have affirmed.

In re the marriage of Rachael and David Sokol

Question: Did the Iowa Court of Appeals err by increasing the amount and duration of spousal support ordered by the trial court in a divorce decree?

Question: Should a suit against county officials have been dismissed because the plaintiff failed to satisfy pleading requirements of a statute providing immunity to municipal employees and officers?

Polk County and four members of the Polk County Board of Supervisors named in a wrongful-discharge claim by former county Human Resources Director Jim Nahas appeal the Polk County District Court’s denial of their motion to dismiss the case. Among other things, the appellants argue Nahas failed to sufficiently plead that his claims are not barred by Iowa Code section 670.4A, which provides statutory immunity to municipal employees and officers for claims alleging violation of a right not clearly established or based on a law that is not “sufficiently clear that every reasonable employee would have understood that the conduct alleged constituted a violation of law.” The appellants also argue Nahas failed to state a claim under Rules of Civil Procedure in his assertion the County committed libel per se by releasing a letter outlining the reasons for his firing, which is a public record under Iowa Code section 22.7(11) and which the County was authorized to release.

Will be submitted to the Court without oral argument Dec. 15.

The State seeks further review of an Aug. 17 ruling by a divided Iowa Court of Appeals panel vacating and remanding Alexander Shantee Thomas Ross’s conviction by a Madison County jury on two counts of sexual abuse in the second degree. Two members of the Court of Appeals’ panel held that the trial court’s jury instructions saying the alleged victims’ testimony does not require corroboration was contrary to precedents of the Iowa Supreme Court. A third member of the panel dissented, citing distinctions between those precedents and Ross’s case. In its application for further review, the State urges the Supreme Court to clarify the question of how a jury instruction properly informs the jury that the testimony of a sex-abuse victim should be treated the same way as the testimony of any other witness.

In the matter of the guardianship of J.W.

The mother of J.W. appeals an Aug. 3 Iowa Court of Appeals ruling reversing and remanding the Polk County District Court’s dismissal of attorney Jacob van Cleaf’s petition to take involuntary guardianship of J.W., the minor child of a former client, based on the trial court’s conclusion that van Cleaf violated Iowa Rules of Professional Conduct. The Court of Appeals held that dismissal of the guardianship action was inappropriate and not supported by the ethics rules, and on remand directed that the District Court determine the scope of admissible evidence in deciding the merits of the guardianship petition given that the mother is a former client of van Cleaf. Court of Appeals Judge Sharon Soorholtz Greer wrote a separate concurring opinion noting her concern that van Cleaf “exercised poor judgment by involving himself in a client’s life in a personal way, which clearly created a difficult situation to now navigate.”

Question: Does the Iowa Supreme Court’s recognition of constitutional tort claims against the State extend as well to municipalities?

Will be submitted to the Court Dec. 15 without oral argument.

Tommy Copeland seeks further review of an Aug. 31 decision of a divided Iowa Court of Appeals panel affirming the Polk County District Court’s denial of his petition for writ of certiorari following his termination as an air base security officer for the Iowa Air National Guard. Copeland argues he was denied a pre-termination hearing to which he, as a veteran, was entitled by the Iowa Veterans Preference Act, Iowa Code Chapter 35C (2020). A majority of the Court of Appeals panel agreed with the District Court that Copeland was exempt from the protections of the Veterans Preference Act under an exception for persons in a “confidential relation to the appointing officer.” Writing in dissent, Court of Appeals Judge Mary Tabor said the majority’s “unnecessarily expansive” reading of the exception undermines the purpose of the statute and threatens to deprive veterans of the protections of the Veterans Preference Act.