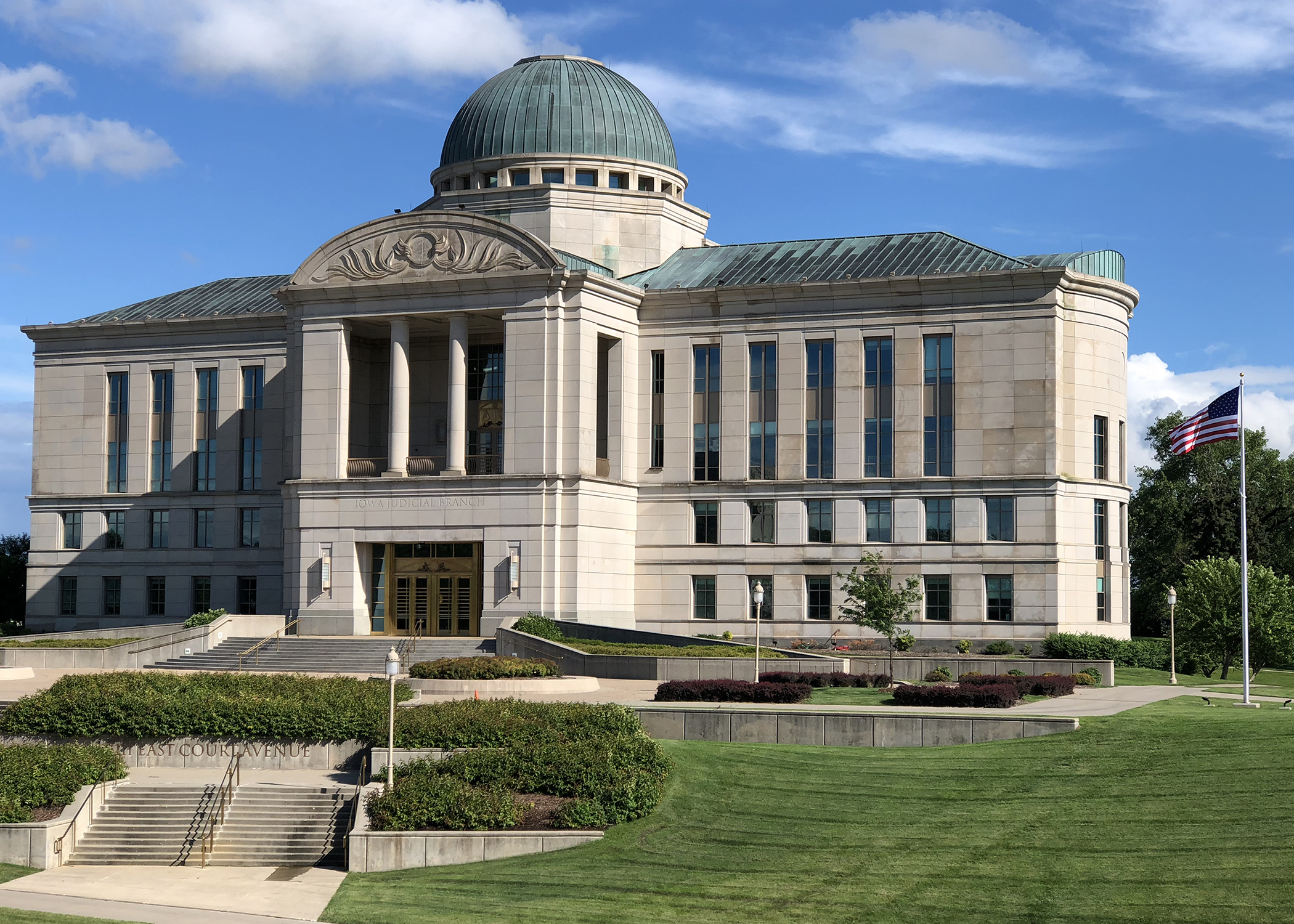 The Iowa Supreme Court kicks off its 2021-22 term with oral arguments Sept. 15 and 16, on seven appeals. Seven additional cases will be submitted to the Court without oral argument. The Court also will hear an oral argument in Oskaloosa on Sept. 23. (Read our earlier post on that case here.)

Following are summaries of 11 September cases to be argued. Go to On Brief’s Cases in the Pipeline page to read the briefs in these cases.

Issue: Should a new trial be ordered in a sex and gender discrimination case?

The Iowa Department of Corrections, et al., appeal the Polk County District Court’s denial of their motion for a new trial following a jury verdict in plaintiff-appellee Jesse Vroegh’s favor for sex and gender-identity discrimination in employment under the Iowa Civil Rights Act. Vroegh, a trangender male, claimed the Department of Corrections violated his civil rights by denying his request to use the men’s restrooms when he was a DOC employee. He also claimed the State defendants violated his civil rights by denying his request for coverage of gender-affirming surgery. The State defendants sought a new trial based on claims of errors by the trial judge. Vroegh cross-appeals the trial court’s pre-trial ruling that Wellmark, as the third-party administrator of the State’s self-funded health insurance plan, should be dismissed from the case because the State had sole control over the plan’s coverage terms, including exclusions such as gender-affirming surgical treatments. [Disclosure: Nyemaster Goode attorneys Debra Hulett and Leslie Behaunek represent cross-appellee Wellmark in this case.]

Issue: Should evidence of illegal drug activity discovered from a search warrant have been suppressed at trial?

Patrick Bracy seeks further review of a Jan. 21 Iowa Court of Appeals ruling affirming the Marshall County District Court’s denial of Patrick Bracy’s motion to suppress evidence obtained in a search of his home used to convict him of drug-related offenses. Bracy argues there was not probable cause for a magistrate to issue the search warrant based on statements to a Marshalltown Police detective by anonymous tipsters and criminal defendant informants, and on jailhouse calls made by Bracy. The Court of Appeals held that the magistrate could reasonably rely on information provided by the police to issue the warrant. Bracy urges the Iowa Supreme Court to reverse the trial court’s ruling on his motion to suppress evidence from the warrant.

Issues: Should evidence from a search of defendant’s trash have been suppressed at trial? Also, do amendments to a statute regarding restitution payments apply to a defendant whose appeal was under review when the amendments became effective, and if so did the Court abuse its discretion assessing costs and fees from the defendant without first assessing his reasonable ability to pay?

Alan James Kuuttila seeks further review of an Aug. 19, 2020, Iowa Court of Appeals ruling affirming in part and remanding in part Kuuttila’s Story County District Court conviction on charges of possession of controlled substances. Kuuttila appealed the trial court’s denial of his motion to suppress evidence obtained by law enforcement authorities from a search of his trash as a violation of his right to privacy under the Iowa Constitution. That appeal was pending before the Iowa Supreme Court ruled on that constitutional question in State v. Wright in June 2021. Kuuttila also urges the Court to rule that amendments to Iowa Code Chapter 910 regarding restitution payments do not apply to him because his appeal was pending when they went into effect. And he argues that the Court erred by assessing costs and fees without first assessing his reasonable ability to pay..

Calcaterra v. Iowa Board of Medicine

Issue: Is the Iowa Board of Medicine prohibited by statute from publicly releasing information from its investigation into charges against a physician?

The Iowa Board of Medicine appeals a Polk County District Court ruling that the Board incorrectly determined in a declaratory order that it is not prohibited by Iowa law from publishing statements of charges against physicians that include investigative information. The Board published on its website and in press releases a statement of charges against Domenico Calcaterra, M.D., claiming he engaged in disruptive behavior. Calcaterra petitioned the Board to issue a declaratory order on whether such publication is prohibited by Iowa Code Section 272C.6(4)(a). The Board responded that it is not prohibited by the statute. Calcaterra sought judicial review of that decision, and the District Court held that the Board misinterpreted the law. The Board urges the Supreme Court to reverse the District Court, arguing that information it published is a public record under the Iowa Open Records Law, and that notice of a contested case under the Iowa Administrative Procedures Act must include the legal basis for the action along with a “short and plain statement of the matters asserted.”

Issue: Did the guardian ad litem for an alleged victim of child sexual abuse exceed her statutory duties by participating in the defendant’s criminal trial?

Jake Skahill seeks further review of a Nov. 4, 2020, Iowa Court of Appeals decision affirming his conviction by a Dubuque County jury of second-degree sexual abuse, lascivious acts with a child, enticing a minor, and indecent exposure. Skahill raised a claim of ineffective assistance of counsel on appeal, saying he was denied a fair trial because his trial counsel failed to object to participation at trial by the child’s guardian ad litem who exceeded the scope of her statutory duties by, among other things, cross-examining witnesses. He also claims the District Court erred in admitting video recordings of forensic interviews with the child. The Court of Appeals determined that the record needed to be expanded, and it preserved Skahill’s ineffective assistance of counsel claim for a possible post-conviction relief proceeding. The Court of Appeals also held that because the evidence against Skahill was overwhelming, any error in admitting the video recorded interviews was harmless error.

Issue: Was a defendant’s right to due process violated when his trial was held in his absence?

Randall Lee Hurlburt appeals his conviction by a Plymouth County jury on a charge of first-offense operating while intoxicated. Hurlburt argues his constitutional rights to confront witnesses, assist his counsel, and select a jury were denied when the trial judge proceeded with the trial even though Hurlburt was in Fort Dodge at the time and did not have transportation to Le Mars to be present for his trial. Hurlbut claims he did not knowingly, voluntarily, and intelligently waive his right to be present at trial. Hurlburt argues that because the trial judge erred in denying his counsel’s motion for a continuance, the Supreme Court should reverse his conviction and remand the case for retrial.

Issue: Was defendant denied a fair trial due to juror misconduct and due to the deaths of witnesses during the 30 years between his first trial and this one?

Stanley Liggins appeals his conviction by a Scott County jury for first degree murder, arguing his constitutional right to a fair trial was violated by, among other things, the trial judge’s failure to investigate juror misconduct during jury deliberations and failure to exclude testimony from four witnesses. Liggins was originally convicted of the murder of a 9-year-old Davenport girl in 1999. Liggins successfully appealed that and two successive convictions before being tried a fourth time in 2019. Liggins argues that the district court in that trial erred in denying his motion to dismiss because nearly 30 years had elapsed since the crime, in which time 22 of 54 witnesses (including a defense witness) had died, and because the State had withheld exculpatory evidence.

Travis Bomgaars and six other Iowa prison inmates appeal the Jasper County District Court’s denial of their consolidated motions for post-conviction relief based on their claims that their right to consideration for release on parole was denied by the Iowa Department of Corrections’ practice of delaying sex offender treatment until near the end of their sentences. The District Court determined that the DOC’s process for scheduling inmates for sex offender treatment does not amount to an unreasonable infringement on their protected liberty interest in parole. Because the DOC has limited capacity in the treatment program and a backlog of 1,600 inmates awaiting treatment, some inmates are not eligible for parole until they have nearly discharged their sentences, meaning they are not considered for meaningful parole, the inmates argue. The appellants argue this effectively creates a mandatory minimum sentence for them rather than indeterminate sentences they received.

Issues: Was evidence wrongly excluded that the accused’s victim had been sexually abused by a person other than the defendant? And, should the Supreme Court apply a “sexual gratification” standard to Iowa’s sex abuse statute?

Michael Montgomery seeks further review of a Feb. 3 Iowa Court of Appeals ruling affirming his conviction by a Sioux County jury of second-degree sexual abuse. Montgomery argues the trial court denied his constitutional right to introduce evidence that the alleged victim had been sexually abused by a different person around the time abuse allegations were made against him. He also urges the Supreme Court to overrule its 1994 ruling in State v. Pearson and hold that Iowa’s sexual-abuse statute requires that, in order to have committed an illegal sex act, the accused must have acted with the intent, motive, or purpose of sexually gratifying himself or the victim. Should the Court decline to overturn Pearson, Montgomery argues it should find that the trial court erred in denying the jury’s request for clarification of a jury instruction on whether Montgomery’s alleged touching of the child was “sexual in nature.” Montgomery seeks a reversal of his conviction and a judgment of acquittal, or a new trial with instructions.

Issue: Did the trial court err by allowing the State prosecutor to charge the defendant with a different offense on the morning of her trial?

The State seeks further review of a Jan. 21 Iowa Court of Appeals ruling reversing Jameesha Allen’s conviction by a Polk County jury of assault while using or displaying a dangerous weapon because the State charged Allen with a wholly new and different offense on the morning of her trial. The State’s initial charge of third-degree criminal mischief and assault causing bodily injury was amended to assault while using or displaying a dangerous weapon, which carries a higher penalty. The State argues the trial judge properly approved amending the assault charge, and the amendment did not impact Allen’s defense or cause her substantial prejudice. The State urges the Supreme Court to clarify when an amended charge is in fact a wholly new and different offense, saying the Court of Appeals’ decision conflicts with Supreme Court precedent and “reflects a growing divergence from the Court’s preferred analysis whether two offenses are ‘wholly new and different’ or ‘the same.’”

Will be submitted to the Court Sept. 16 without oral argument.

Issue: Should the defendant have received a new trial because the prosecution was allowed to amend the charge to a different and more serious offense seven days before trial?

James Vandermark seeks further review of a Jan.  21 Iowa Court of Appeals decision affirming his conviction by a Polk County jury of willful injury causing bodily injury. Vandermark argues that his motion for a new trial should have been granted because the trial judge erred in allowing an amended trial information to be filed seven days before his trial that was a wholly new and different charge and prejudicial to Vandermark. The initial trial information charged Vandermark with assault causing injury, a serious misdemeanor. Seven days before the trial, the State filed an amended trial information charging Vandermark with willful injury causing bodily injury, a Class D felony carrying a higher penalty.