[This article by Matthew A. McGuire and Spencer S. Cady was originally published in the August 2022 issue of The Iowa Lawyer magazine. The 2021-2022 term statistics were compiled by Chris Slack.]

The 2021-2022 term of the Iowa Supreme Court concluded on June 30. A statistical analysis reveals that the recent trend of reduced polarization among the current justices in non-unanimous cases continues, with the justices deciding fewer closely divided 4-3 cases. The data also shows continued independence among the individual justices, with the justices agreeing or disagreeing with one another in a much less predictable fashion from case to case—a contrast from the durable 3-3-1 alignment of the previous Cady Court.

But reduced polarization in alignment among the justices in close cases has not heralded an era of consensus. In fact, the opposite is true. In deciding 105 cases this term, the justices issued 72 separate opinions concurring with or dissenting from the majority opinion—and often both at once. This is a marked increase in disagreement compared with prior terms. So, while the number of closely divided cases has dropped, it appears there remain many topics about which the justices disagree.

Opinions by the numbers

The Iowa Supreme Court decided 105 cases by opinion last term, which is consistent with historical opinion totals, but a decline from last year’s 119 cases decided by opinion. Sixty-six of these opinions were unanimous, while 39 were non-unanimous. As noted above, in those 39 non-unanimous cases, individual justices authored 72 separate opinions concurring with or dissenting from the majority opinion. This is a notable increase of approximately 25% compared with prior terms. Between the 2017-2018 term and the 2020-2021 term, the justices collectively issued on average only 58 separate opinions. 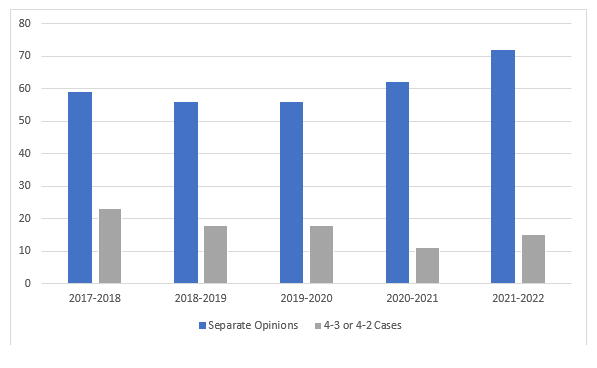 This term, 43 cases came to the court by way of direct appeal, while jurisdiction in 52 cases arose as a result of further review of the Iowa Court of Appeals. These two categories comprised 90% of the total cases. The court heard four cases on direct interlocutory appeal and six attorney discipline cases. These proportions are consistent with prior terms. 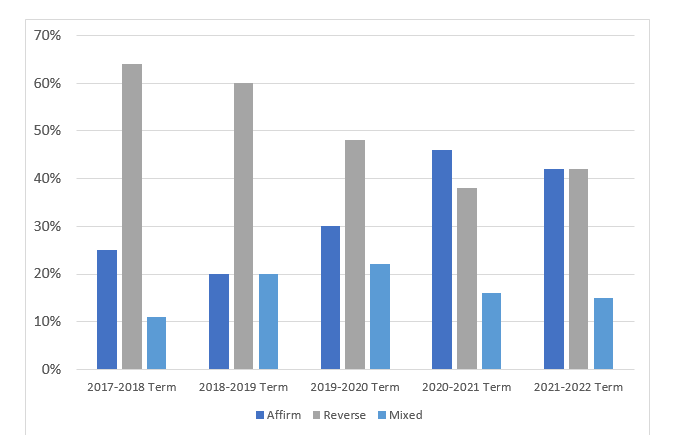 Instead, almost every justice agreed with every other justice between 30-70% of the time. Justice Appel and Justice McDermott in particular exhibited the narrowest range, neither agreeing nor disagreeing with any particular colleague on a consistent basis.

Justice McDermott was least likely to be in the majority this term, dissenting in 10 of the 15 closely divided cases. And while last term Justice Waterman and Justice Mansfield found themselves in the majority of closely divided cases over 80-70% of the time, respectively, this term these justices were far less likely to join the opinion of the court in such cases – only 53% of the time for Justice Waterman and 43% of the time for Justice Mansfield.

After a period during which four seats on the Iowa Supreme Court turned over during a span of just a few years, the Iowa Supreme Court’s 2021-2022 term marked the second full term with the then-existing composition of justices. Within this sample size, the most striking statistical takeaway remains the end of clear patterns of agreement or disagreement between individual justices in non-unanimous cases. (And, perhaps, that opinions of the Court of Appeals are considerably more likely to be affirmed.)

With Justice Appel’s retirement at the end of the 2021-2022 term, the Iowa Supreme Court’s composition will change once more. It may, therefore, become even more difficult for practitioners before the court to predict which justices will agree with one another from case to case.